In the 1940s, a train engineer and inventor named Elmer Sandley began building locomotives while working for Sandley Light Railway Equipment Works, Inc. The company’s first steamer was No. 4001, running out of Janesville, Wisconsin in Riverside Park—the inspiration for what would later become the Riverside & Great Northern Railway. Over the years, the company’s trains have traveled across numerous railroads throughout the United States, including tracks in Wisconsin Dells.

When Mr. Sandley passed away in 1982, his company slipped into foreclosure and bankruptcy. Fortunately, it wasn’t the end of the line for the railroad. A group of volunteers and donors known as the Riverside & Great Northern Railway Preservation Society rallied together in 1988 to protect and preserve the rich heritage of the locomotives and passenger cars built by Sandley Light Railway Equipment Works, Inc. Today, the railway continues to operate as a museum—giving visitors a look at life on a genuine working light railroad.

Hop on and go for a ride onboard an authentic 15-inch gauge train belonging to the Riverside & Great Northern Railway’s rolling stock. Marvel at this impressive locomotive being turned by hand on a rotating table to depart from the station at Western Springs—then go full steam ahead through 3 miles of scenic rock formations, narrow canyons and spectacular woodland beauty en route to the final stop at the Hyde Park Depot. Riding the rails on this train is a fun-filled event the entire family can enjoy.

It is recommended that you arrive at least 15 minutes before train runs to give yourself plenty of time to get your ticket.

The grounds of the museum are well maintained and inviting, so pack a lunch and enjoy a picnic with your family as you watch the trains go by. Or just stop by the snack shop and pick up treats. Be sure to visit the gift shop and bring home some souvenirs including railroad related toys, apparel and memorabilia. While you’re shopping, the kids will enjoy tinkering around with a Thomas & Friends™ train layout.

The Riverside & Great Northern Railway can be found approximately 1 mile north of Wisconsin Dells just west of the Wisconsin River.

Wave of Waterparks in the Wisconsin Dells

In Pursuit of Food at Christmas Mountain Village

The Best Resort Skiing in America 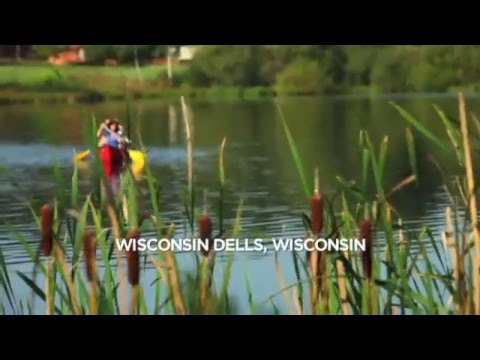